Posted by RobotCaleb on November 7, 2012
Posted in: StratoSphere. 2 comments

On November 3rd, 2012, 3 coworkers and I set out to launch my second balloon in preparation for the final launch. The mission for this balloon was to test some anti-fog techniques and to give my so-called ‘Sensor Pod’ a test run. We hooked up with Monroe and Stewart from Team Prometheus at a nice park in San Saba, Texas.

Launch occurred at about 1215 GMT-6 from the middle of a baseball field. Assembling the payload line, filling the balloon, and launch all went off without a hitch. (Except for the misplacement of one Leatherman tool. Sorry Stewart!)

Within a few seconds after releasing the balloon we got confirmation that the APRS packets were being picked up by the online APRS network. We then packed up and drove into town to find the public library. We hopped on their wifi and monitored the health of the balloon and made plans on how to proceed. We elected to get lunch and then start chasing it.

The chase was mostly uneventful. First we determined where we should go based on our new prediction. The balloon wasn’t ascending as fast as our previous predictions were run with, so we had to re-predict. We determined that Gatesville, TX was a good point at which to reassess.

Lunch ran a bit long, so by the time we were about 20 miles outside of Gatesville we started receiving phone calls stating that it appeared to be on the ground and asking if we’d retrieved it. This was also about the time we started to get a useful data connection on our phones, so we started looking at where it was. It appeared to be in or very near to a pond.

We drove as close as we could and asked one of the families in the last house on the road if they could give us some guidance. After examining the map they directed us to the landowners at a nearby house. We gained permission to go on the land and proceeded to hike in toward the pond.

After ensuring the the car wouldn’t start a grass fire we set off to retrieve the payload. We had to traverse a number of barbed wire fences and dodge numerous cow pies along the way. Eventually we could observe a berm in the near distance and assumed that to be the berm containing the pond. From the top of the berm we could look down and into a small pond. A quick scan showed no sign of the payload _in_ the pond. A small sigh of relief later we spotted the parachute at the opposite side and on the top of the berm. The payload was further down the water-side slope of the berm, about 8-10 feet from the water.

It appeared that the payload was traveling northeast and struck the southwest facing downward inner slope of the berm. It caught in the grass and pulled the parachute down. Recovering it was a small matter of walking over and collecting the whole chain.

After recovering the payload box I pressed the camera buttons to see if they would turn off or on. They both turned on and immediately went into recording mode. A few minutes later they both beeped the low battery signal and turned off, which indicated to me that the batteries had drained to the point of turning off the cameras. Much better than my previous flight where the camera shut off with a still mostly full battery.

I opened the box and turned off the sensor pod and the APRS transmitter. I gathered the the payload chain into the chute and we turned around to hike out. After that it was just a matter of driving home and then looking at the data.

As you can see in this map of the predicted path overlaid with the actual path the balloon behaved as expected. It went long due to not providing enough lift, but the prediction gave us a good idea of which direction to go in anticipation of the landing.

My sensor pod performed mostly as I desired. It did restart itself 257 times. I’m not sure if that’s a mechanical issue or what. The data didn’t seem to suffer too much for it, though. The disappointing thing was the GPS. I thought I had used a GPS module that worked up to the altitudes the payload would be hitting, but the one I used (D2523T from SparkFun) capped out at 40k ft. The left about 63k ft unaccounted for. I’ll be trying to get my backup module integrated before the next launch

The cameras performed very well. I had one facing up-ish and one facing down-ish. The top camera got a lot of sky and sun footage but nothing very interesting. The downward facing camera, however, got a ton of great shots of the landscape, the horizon, and very interesting cloud formations. Condensation wasn’t too much of an issue. What little did form actually dissipated before too long. The only downside was that, due to the slow ascent rate, the cameras stopped recording before getting the landing or even the burst of the balloon. (Which wouldn’t have been fun to watch anyway, as the top camera couldn’t even see the balloon)

Overall, the mission was a success. Questions raised by the first launch were mostly answered by this launch and some assumptions were validated. I hope to have some video available for viewing soon. In the meantime, enjoy these two extracted cloud shots and the images below of the launch and recovery.

Big thanks to Ben, Steve, Ryan, Monroe, and Stewart for their assistance. 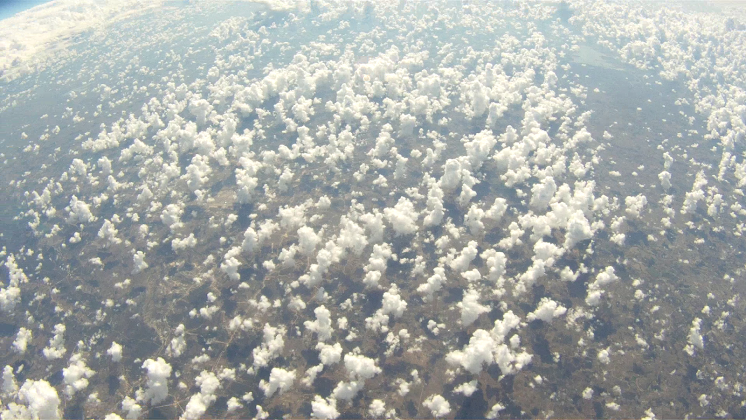